Injuries can be caused by a blow or a fall. When a blow is anticipated, we instinctively turn away from it, which leads to getting hit on the side of our body. Those muscles then reflexively contract so that they form a shield. If the blow is strong enough or creates a big enough “shock,” the contraction or tensing up the muscles becomes a habit. The brain behaves as if the blow or injury was still happening. When the pattern of muscle contraction becomes a habit, sensory-motor amnesia develops in these muscles. We forget how to feel and move these muscles properly. So in the case of a strong blow or an ugly fall, we inadvertently acquire the trauma reflex’s habit. The muscles on one side of the waist remain contracted. These tense muscles in the waist pull the hips towards the ribs and the ribs towards the hips. Usually, this also involves the rotation of the spine. This is illustrated in the pictures below: 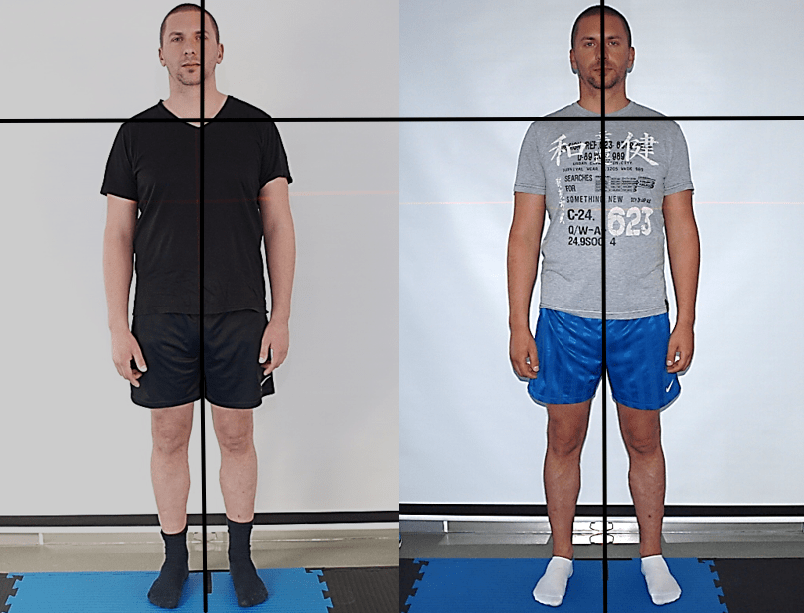 We can notice a couple of things on this image:

The trauma reflex causes these cases of changed posture. They can be barely noticeable or very apparent. When these distortions become a habit, we are no longer balanced, just like the person in the picture on the left. Although the cuts and abrasions have healed and the bruises have faded, the nervous system persists with the patterns with which it reacted during and because of the injury. One side of the body remains rigid, breaking symmetry and making the locomotion system less efficient. If we remain stuck in the trauma reflex, we will most likely experience even more injuries since our balance and symmetry aren’t what they used to be. This causes muscle tension in one part of the body, which becomes a habit. Simultaneously, it causes the expansion of muscles on the other side, where we usually begin to feel pain, despite the cause being on the opposite side.

A steady step (walking pattern) depends on maintaining the central nervous system’s ability to tense or relax the muscles of the center of the body in a coordinated manner until the end so that it can rotate unhindered. If you cannot completely lengthen one side of the waist and appropriately shorten the other and allow the spine to rotate freely around its axis, your stride will not be even or balanced. You will walk with more weight on one side, which leads to back, hip, knee, and ankle pain only on one side because it’s burdened more than the other. We can easily see this if we look at the pictures above and imagine these same asymmetries in motion. These also cause greater wear and tear on the joints of the affected side, leading to structural changes in the joints. The trauma reflex is also the cause of many alleged discrepancies regarding leg length. The shortened side of the waist can cause a false “short” leg.

Suppose the trauma reflex is being accompanied by the green light reflex (which is very common). In that case, we see additional problems such as sciatica and plantar fasciitis (inflammation of the tendon of the arch of the foot), which occur due to tense muscles on one side of the body that become a habit and due to tension on the back of the body which also becomes a habit.

The trauma reflex can also develop in more harmless ways. For example, when we are hunched over while sitting behind a table and working with a computer for several hours. Or when we often and for too long nurture a baby on the same side. The result is the same: loss of the ability to expand the muscles in our waist on one side of the body, which is why we are surprised by sudden, unexplained pain. If this reflex is not rectified, we can become caught in a circle of injury and pain.

A few examples of how a trauma reflex can develop:

Now you have become more familiar with the trauma reflex. Luckily, it is quite easy to eliminate it. The best and least painful way of doing it is with individual therapies of the AEQ method and somatic movement and exercises performed at home. The AEQ method teaches us how to regain control over the affected muscles and thus influence the brain to give our more accurate orders, while the muscles will once more expand to their correct length. They will become soft and relaxed, your step will become steady, and your body will be balanced and perform symmetric movement.