Certain events in our childhood leave a mark on us; if they are traumatic, we suppress them into the subconscious and then carry them around as extra luggage. It is self-protective, but at the same time, it burdens us.

These experiences lead to chronic reflex activation that leaves movement patterns as a result, which also shape our personality. Movement patterns are intertwined with behavior, and this is more or less accepted by society. As we adjust ourselves to be accepted by others, we add new layers that slightly smooth out behavioral deviations. All of the above builds our personality, directs our emotional reactions, and influences our appearance – posture, movement, behavior, character…

Most actual causes for chronic pain and strong sensory-motor amnesia (SMA) originate from different events in childhood. A child commonly imitates the posture and habits of one of his parents. Many generations have passed, believing that hard work is necessary for progress and that fighting or even asceticism was the only true path towards success.

Think about a child in the first grade of an elementary school. He is enthusiastic; he volunteers, raises his hands, and learns with interest. Then look at the same child in high school: he doesn’t answer or ask questions. He looks at the floor or the phone; he’s separated from the learning process. Through the years, he noticed that making a mistake means becoming an object of ridicule and sometimes contempt, so he stops participating and thus protects himself. He was taught that the solution to all problems and misunderstandings is not in his hands: independent thinking brings him problems, so he stops being natural and is afraid to decide at his discretion. He believes he can only succeed if he doesn’t show emotion.

However, our sensory-motor systems have been perfected and became capable by evolving through evolution and enabling survival. If we consider how many different skills a child can learn in the first five years of life and how many later ones, we quickly notice the difference; a small child learns without undue effort, taking slow, soft, conscious actions. He progresses through the game, performing the movements consciously, although due to the ease of movement, we find them to be spontaneous. It doesn’t use excessive force, it doesn’t exaggerate the point of pain, it doesn’t limit itself to time constraints, and it doesn’t skip steps to the goal.

This way of learning results from a good connection between the body and consciousness, which, however, worsens as we grow up due to the influence of the environment. This connection is seldom good enough in an adult, and as such, is passed on to his offspring. Besides, he does not understand his child well enough. Sensory-motor amnesia, therefore, also affects parent-child relationships. Parents often misjudge what a child wants or needs because they do not indulge in intuition.

SMA in a more natural environment doesn’t have enough influence to obscure communication between parents and children. The opposite is true in an urban environment. Let’s take the perception of time: parents always lack it, they perceive it relatively and rationally, and the child realistically, the time has no real limits. A child’s curiosity became annoying for the parents if they do not have enough time to meet this child’s natural need. The same is true for educators and teachers.

The limitations that a child experiences with adults are also reflected in the child’s movement: they cause stiffness, awkwardness, and fear. Just as he does not dare to raise his hand in school, he does not dare to jump from stone to stone after school or make a move that would challenge him. At the same time, he does not have enough opportunities to imitate role models and older peers if he does not attend playgrounds or cultivate sports. Therefore, children are forced to play with parents whose movement is not easy for a role model. At the same time, the curiosity for more demanding movements disappears.

I believe that knowledge of sensory-motor amnesia would make an important contribution to improving movement and relationships. The more we understand, the more we can change our current condition. We have to be aware of the importance of time in mutual relationships, and we have to try to understand our child’s needs. The AEQ exercises will help us feel the need to get to know the method even better. 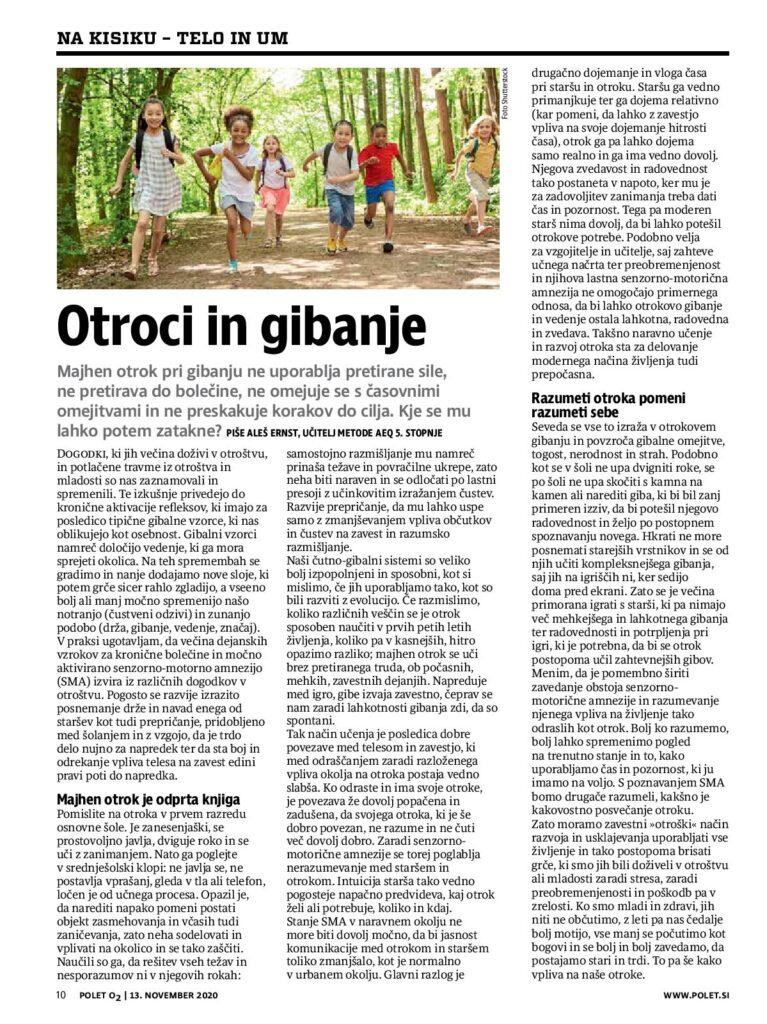