The source article can be found by pressing the button on the bottom of the page.

As an experienced cyclist and a long-time owner of a bicycle shop, I have often observed the consequences of the wrong approach to sports and the wrong motive for success in sports with my clients. Most of the time, the runner wanted to buy a bike to relieve the knees and tendons, as he was advised – a friend, an orthopedist, a physiotherapist… – to ride a bike at least a few days a week instead of running. Simultaneously, the runner says that he has had more and more pain and injuries in recent years. It is becoming increasingly difficult to maintain a level of results that suits his ambition or plan. He usually bought a road bike to keep fit. Subsequently, most switched from running to cycling; there was less running, more cycling. The attitude towards the body, however, remained unchanged.

Tendon and knee problems were slowly being replaced by hip, back, and arm problems. There was a need to change the position on the bike and ride a mountain or trekking bike. Hours and kilometers traveled were less and less, problems more and more. Usually, the problems were attributed to aging or inadequate body structure, and less often to inadequate attitude towards movement and wrong motive. It became increasingly difficult to maintain the level achieved. The coordination of the body’s functioning and awareness of what the whole body was doing to achieve the set goals was deteriorating. It distorted the respiratory rhythm and reduced respiratory efficiency and increased muscle tension, which obscured the body’s true state.

An increased muscle tone and incorrect breathing increase the joints and ligaments’ pressure and a lower blood pH. That’s why the body’s balance is harder to maintain, leading to a more commonly activated sympathetic mode of the autonomous nervous system. This prevents an appropriate relationship between action and rest. Gradually, a destructive congestion feedback loop is created. With it, we block warnings from the body, and this congestion causes inefficient movement, and so on into a vicious circle.

A disconnect inside the whole makes maintaining the achieved harder and increases the ego’s role to maintain the unrealistically set goals or wishes. But physics is without mercy and influences the whole and punishes inefficiency. That’s why we need to decrease the complexity and quality of life and come to terms that we need to move from a sport with higher complexity of movement to a sport with a lower complexity of movement. With stubbornness, we achieve a similar performance level for a while, as in the past, thinking that everything is fine and that we have outwitted the system. But since we aren’t sorting out the causes, we cannot prevent the degradation of our inner connection and maintain a certain achievement level.

Technology helps us for a while, and we are prepared to pay large sums for it. Running sneakers with more care put in by the manufacturer can help us run without pain in the short-term despite the complexity of the movement, and the connection between the mind and body being unsuitable for the speed, force, and distance achieved the movement. It is similar to cycling, where technological influence is even larger than with running. This can be most commonly observed with the increasing amount of electric bikes that enable active cycling with speeds, altitude profiles, and distances. The human body is not adapted.

We know that the pitcher goes for water until it breaks. Nowadays, we generally suffer from a lack of time and self-analysis. We don’t ask ourselves why it is important to be successful with certain activities and expose ourselves to problems. Technology, strong marketing, and bribed studies of how useful something enables us to remain unrealistic until we break our bodies. At that time, however, we are looking for a solution in various approaches that regulate the consequences of the mess we have created for ourselves from the outside.

If we notice that we are becoming worse at a sport, we found it necessary to gain time and energy to think about what has changed since then. Why did we create a business out of this pleasure, and have we lost contact with reality and our body in the process?

When we don’t have enough bodily integrity and emotional maturity, we avoid and run away from uncomfortable areas in our life into the ones where we are more sovereign and effective in overcoming problems. These areas give us more pleasant feelings, unlike those we aren’t as efficient and thus give us uncomfortable and painful feelings. In understanding the importance of dealing with relationships where we are ineffective, we choose an immature decision and focus even more on effective areas.

That’s how we create an imbalance and contract the body. In the long run, the impact of illusion means reducing the complexity and quality of life, which is declining much faster than would be expected due to aging.

The decline in efficiency is always due to a lack of ability to make a realistic assessment. That’s why it’s needed to take a step or two back and think about what we are trying to prove and to who we are trying to prove it. Why, in the name of diligence and perseverance, we put ourselves in a position of numbness and fatigue, where we care about what is happening around us, and why we have an increasing need to be that way to ourselves. We need to test our ability to relax and calm the body, emotions, and mind, especially since most athletes mix feelings of relaxation and fatigue. We have to analyze how we breathe and understand the connection of breathing with what we are currently doing and how we are currently feeling, how commonly we are holding our breath and how many times we exhale fully and ready our lungs on a new inhale.

Let’s find out when our heart last pounded when we put on running shoes or sat on a bike and set out to explore ourselves and our surroundings with a cheerful face without pressure, schedule, GPS, or a heart rate monitor. Let’s not forget that the ego means more about achieving a goal than the path to the goal, and if the goal means more to us than the path to it, it’s clear who is leading the process and what the result is likely to be.

It’s good to remember how we used to think of a certain sport before injecting with a mantra that effort conquers all obstacles. Let’s define what successful even means being and if it is worth sacrificing the authenticity of our relationship towards us and others. Let’s not tread a new path into the unknown until we understand well enough why the path we walked with the best of intentions, led us to an unwanted goal. Otherwise, we will similarly repeat the mistake in other circumstances with other players.

A man is turning, life turns.

CONTROLLING YOUR MUSCLES TO CONTROL YOUR EMOTIONS 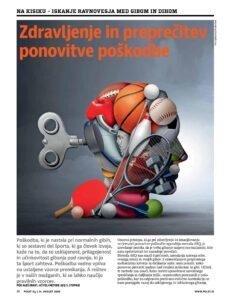 HEALING INJURIES AND PREVENTING NEW ONES