The source article can be found by pressing the button on the bottom of the screen.

We feel our inner and outer world through our bodies, through which we also respond to it. By learning with the AEQ method, we change these relationships and create a stronger and clearer connection with the body’s reality.

Based on the reality of bodily sensations, our identity has content and structure.

For each of us, the basic reality is our body. The loss of the influence of bodily sensations on the functioning of the mind and balance changes lives and creates chronic constriction and malfunction of the sensory-motor feedback loop. For a person in this state its common that:

(1) He tries to achieve the impossible or is holding onto an illusion.

(2) Isn’t grounded and has a strong feeling of weakness

A person who isn’t grounded has no hope and faith and tries to achieve the impossible. On the other hand, a grounded person has faith and hope and is in touch with reality. Probably the best way to say this is to have a person who is in touch with reality, grounded, and has faith in themselves, but such a situation is extremely rare nowadays, as the way of modern life makes this connection impossible.

Reality is a word that has several different meanings for different people. Some see it as a necessity to earn a living; others see it as a rule of nature – the weak die, the strong thrive – but some see it as life without the pressures of a competitive society.

We have all experienced that when we feel good and happy, we perceive the world better, unlike when depressed, when we see the world as colorless.

By learning with the AEQ method, we change these relationships and create a stronger and clearer connection with the body’s reality. The degree of separation you feel through performing AEQ exercises shows how much self-awareness you have lost. The unavoidable reality of life is that the person is the body, and the body is the person. When the body dies, the person dies. But when the body ” dies”, i.e., he doesn’t feel anything, and then the person ceases to exist as someone with a personality. The body is the one who melts because of love, freezes from fear, shakes in anger, and longing after warmth and connection.

Without feelings from the body, these words sound empty. If the body experienced them and the conscious felt them, they have a basis of reality, which gives meaning to their existence. During therapy, patients commonly realize that they can’t name or understand the feelings they began feeling due to a distorted or underdeveloped internal connection.

Based on actual body feelings, our identity has its structure. But in today’s reality, identity is becoming more a thing of the past, a skeleton without flesh.

When teaching a person individually or during workshops, I frequently observe that a person that isn’t in touch with reality doesn’t understand what I’m talking about when describing the influence of feelings on one’s mind. Sometimes, they even ask, “What does my body have to do with how I feel?”

This question is pointless because what the person feels is the body. Besides the body’s feeling that originates from our body, there is no other feeling in us. For a person to ask such a question, they need to be convinced that the body is merely a mechanism supporting life and not influencing it.

To eliminate unexplained pain and illness, a person must gain insight into their inner unconscious mental process and understand the existence and impact of sensory-motor amnesia – of course, if they want to understand their movement and behavior.

But how can he develop the needed understanding if he ignores the basic reality of his being or his body’s feelings?

How a person stands, walks, and expresses his feelings, tells who he is. We know that by instinct, ever since we were kids. Through the development of technology and the increase in the speed of life, we have not seen the obvious before us. This blindness was developed from the long persuasion that taught us to believe that a person is to be identified by their mind instead of their body. We were convinced of not trusting our feelings since they give our mind subjective data.

However, if a person doesn’t trust their feelings, they can’t trust their bodily perception and bodily responses. And logically, she can’t be sure of reality and lives in an illusion.

Resistance to portraying the body as the essence of a person is deeply integrated into most people. When in the workshop, I sometimes describe the character of someone I see for the first time. Through body shape, movement, and voice, I connect the consequences of attending the workshop with causes originating from childhood. I often see the ego’s disbelief and resistance, who otherwise knows that what he hears is real. Still, he does not know how to understand and accept that it is possible.

This is because it’s impossible to explain or understand objectively. Despite there being nothing supernatural or mystic. Rather the opposite. Clean natural reality and a deep enough understanding of physical laws and a connection with the subjective feeling.

It isn’t resistance that you can defeat or remove, because most people aren’t ready to surrender their illusion that the mind, with enough data, is omnipotent. Almighty.

How a person behaves, speaks, walks, and expresses emotions all tell who he is.

This disconnect with reality is the most common cause of an unreal attitude towards an athlete’s accomplishments with his work. Due to the loss of this connection between the body and reality, the athlete’s work on preparations and the competitions itself is too overwhelming, and the same is his reaction when he doesn’t achieve his goal. The movement that is needed to achieve the result always comes from inside the body, which can’t fulfill his consciousness’s unrealistic expectations. Therefore, he is also very disappointed if the desired result has not been achieved, and he perceives that his body has betrayed him – and betrayal always hurts a lot.

The problem comes from this simple rule that actions define results and not by the mind’s wishes or needs. And acts are always performed by the body which defines the result – if there isn’t any connection between the two – which isn’t necessarily what we wanted. The frequent achievement of unwanted results and the strong frustration we feel simultaneously indicate an unconscious separation between the body and mind. And to eliminate these problems, it’s obvious that this disconnect needs to be fixed.

In this way, through a change in understanding the causes of unwanted outcomes, we focus our efforts on overcoming the separation within ourselves and not overcoming ourselves. A person that constantly overcomes himself will sooner or later bring himself down.

And that certainly isn’t a winner’s posture.

Therefore, when learning the AEQ method, the greatest emphasis is on gaining a deeper understanding of oneself through theory and feeling and perceiving the real state of oneself through AEQ exercises. All this is then upgraded and connected through only through exercises and principles of AEQ breathing, which enables the integration of mind, body, and energy into a balanced whole that can and knows how to combine natural and human laws into syntropy, into the inner order of life. 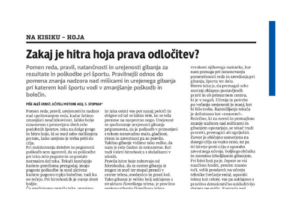 HEALING INJURIES AND PREVENTING NEW ONES

WHAT IS MY TRUE SPORTS GOAL?