REDUCTION AND ELIMINATION OF SCOLIOSIS

Scoliosis, illness of the entire family

Although scoliosis may also be associated with the genetic picture, stress is an important factor in idiopathic scoliosis.

The basic principle of human functioning is as follows:

Scoliosis is usually caused by physical or emotional injuries in childhood or the transition to adolescence. When dealing with clients who have scoliosis, I usually encounter strong emotional traumas in childhood. These were immersed in muscle armor, which served as temporary quarantine and alienated the body from the mind.

A more uncommon cause for scoliosis is a bodily injury or complications during birth. Such scoliosis requires a different approach and cannot be effectively reduced without knowledge of active individual therapy. Certain forms of skeletal asymmetries, however, it cannot be eliminated somatically, and a higher-grade AEQ teacher will help reduce unnecessary muscle tension. This will make rest better, movement easier, and less pressure on the joints and ligaments.

When we become injured or emotionally hurt, our brains immediately tighten waist muscles and torso turners and prevent further pain and spread. This reflex creates a muscle tension pattern consistent with scoliosis’s curve, minor or major. Many decide for an operation where they insert Harrington’s bars inside their spine, while others begin with regular training and stretching methods.

Conflicts between parents and teenagers, such as those arising from a bad attitude toward school obligations, can lead to a dispute that teenagers resolve through anger and rebellion. It often remains unresolved. Anger in their abdomen causes pressure. The result of this is chronically tense muscles, which is the groundwork for scoliosis—that why parents need to advocate for healthy and balanced relationships. A teenager usually doesn’t have the knowledge to be regulated and be aware of the pressure. Even sports won’t particularly help with balancing movement. Training usually only increases the asymmetry or moves it from the shoulders towards the pelvis and knees.

We eliminate it by teaching the parents since children have no understanding and no use of the reality principle. They also aren’t familiar with the concept of working harder today for a better tomorrow.

The reality principle is the basis of the AEQ method and is the most basic condition for removing scoliosis.

We help children indirectly because they learn from the parents’ movement habits, posture, communication, and order. Through improving relationships, progress is visible. 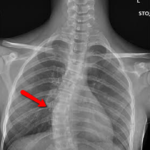 The approach is similar, as are the causes, except that in adults, the causes of the postural disorder can be maternity or care (disability, cerebral palsy, family dementia) and severe long-term emotional periods (death, divorce, rape, psychological harassment), excessive and improper movement at work or in sport.

An additional problem when working with an adult with scoliosis is treating scoliosis in childhood with medical procedures or the training of torso muscles, which is the most common approach to eliminating scoliosis. Usually, this further increases the torso’s chronic constriction and makes the person even angrier and stubborn, making it difficult for the teacher of the AEQ method to teach. Such a person performs exercises with violence and rigidity. In the case of an adult, the role of parents is taken over by the person himself, and he has to deal much more with himself and analyze the influence of the past on his present state.

The very approach to learning and performing the exercises is the same as for teenage scoliosis.

The elimination of the cause

The main issue with scoliosis is the loss of sensing the body’s current state and the alienation of the mind and body. A patient in such a condition views his body as an enemy. He is stubborn, rough, and cannot use his time, energy, and attention efficiently. He is usually from a family that suffered heavy mental or emotional trauma, never has time, and cannot master clear communication.

There are many unsolved issues and a lack of nonconflicted communication between a teenager and his parents. Because the mother with her calming hug wasn’t able to eliminate her child’s surplus emotional energy, it increased pressure in the body’s center. A common reason for the inability to transfer energy can also be the mother’s insufficiently permeable membrane (outer shell of the body), which causes her poor posture and movement, which takes over the child in the first seven years of life. As a teenager, he, therefore, has similar problems.

An increased pressure controls the mind through contraction of the lower body muscles, diaphragm, rib cage, and neck. This is how the system prevents the pressure creating energy to burst into the head (loss of conscious control and fits of rage or loss of control over various addictive substances). If we don’t get rid of the causes, the pressure only increases, and at some point, the muscle armor loosens. That’s when we notice scoliotic posture (usually at a systematic medical examination at the age of 12).

If the body’s energy cannot be released, it travels upwards when the “safety valve” is released. We notice this through outbursts of verbal or physical uncontrolled and excessive aggression against others or ourselves (insulting or cutting ourselves, getting drunk). The teenager feels increasingly misunderstood and moves away from his parents.

At least one parent should be actively involved in scoliosis treatment, and the other should be well informed about the importance of exercise and satisfactory communication. In talking to everyone involved, we will begin to notice vague communication to determine where changes are needed and at what pace they will introduce them.

Discipline, orderliness, and free time without any tensions are key for the teenager to eliminate scoliosis. Exercises will only be a tool for learning better focus. Relationships and thinking will gradually improve.

My experience with eliminating scoliosis:

My two sons and scoliosis

One year ago, I first went into contact with Aleš Ernst. I read somewhere how someone called him a wizard. I agree. You have to cooperate under his guidance actively and remain brave and are willing to continue because it isn’t always easy. You discover emotional causes for physical pain, and you realize that your emotional baggage can influence your kids or the people close in your life.

It is hard to hear the truth, and it is up to us to accept it or bury it deep inside ourselves and clean up what consequentially hurts the ones we love, which can lead to mental or physical states of illness. I want to share my experience, as I was also addressed by the experience of a mother who described the changes in her little girl, who had scoliosis and practically eliminated it with the help of Aleš. I sought help from Aleš right after our 13-year-old son was diagnosed with scoliosis.

Aleš first suggested a visit to his workshop since, as a mother, I must first bring myself into order because my rigidity impacts my children. Hallelujah! I immediately found out that I am talking to someone who knows about the deep causes of physical irregularities. I visited his workshop called ‘The influence of emotions and stress on chronic pain, fatigue, depression, headaches, and muscle rigidity.’ My son was diagnosed with type 1 diabetes when he was 16 months old. Managing an illness on a child so young demands every second of your day and night and have perfect control over his blood sugar or else the child might die. In addition to all the other obligations, I also experienced the job extremely exhausting and persisted in practically impossible conditions for a decade. The fear for my son’s life has kept me awake despite the chronic fatigue, time, and time again, I ignored fatigue and body aches and continued to monitor my son’s sugar movements every night. My muscles were all tightened due to all the worries and fear. Even though my son could monitor his blood sugar, I couldn’t relax even on a longer vacation.

I was always tired. I wasn’t dealing with my problems. The pain was always there, but I tried to cut my body off and ignore it because I thought I had no other choice. My condition was also affecting my son. After the workshop, I arranged an active therapy session with Aleš. It seemed strange to me; at the same time, I immediately believed in the idea that I had to attend the therapies on my own so that later the therapy could help my son. The mother’s condition is extremely important for the child.

Everything that Aleš was telling was clear to me on a rational level, but how to manage things emotionally was a completely different story. It wasn’t clear to me how he can help, but after the workshop, I believed that he could. Aleš’s therapies include comprehensive individual treatment. It’s not just about exercise. It helps us get to know ourselves better, our emotions, the causes of experiencing ourselves and others, the environment, and the world around us. It helps us understand the physical problems that cause us to seek help. While I was talking with Aleš, I discovered things about myself that I thought weren’t even important. I persisted with daily exercises and repeatedly noticed unnecessary tension in my shoulders.

With pleasure, I began to experience moments here and now.

Even when I am on the road in a traffic jam, I wait perfectly calm without having my mind rush from one problem to another.

I am more attentive to my body during my walks.

I perceive my surroundings differently.

I noticed a bigger calm, feeling of stability, patience, and more energy throughout the day.

I changed my communication way, which was pretty harsh at first, which I hadn’t even been aware of.

After a year of therapy with Aleš and conscious performance of exercises, I finally get up in the morning without any problems.

Today my days begin more positively. My son’s results are excellent. After only half a year of learning and performing the exercises, scoliosis receded, and the back pain completely disappeared. He says that he feels more relaxed, self-consciously communicates and understands the influence of emotions and relationships on his posture and mood. Only now is he aware that he had chronically tense muscles.